Progress is being made on my Cyberpunk themed scene. I have finalized the interior blockout for my scene to get the general placement of objects correct. I went from the original concept art and then took from other sources of inspiration to build out the room layout. I have giant tubes leading from the pod to a large computer terminal, The wires above are coming from a broken ceiling light I have pipes coming lining some of the walls. I shrunk down the room and swapped where I had the door and where I now have the windows. I plan to fill parts of the room with clutter objects from Megascans in order to fill some of the empty spaces. I want to think of this as a game level that you can walk around in, and I want a scene that works in multiple angles by the times I have completed. 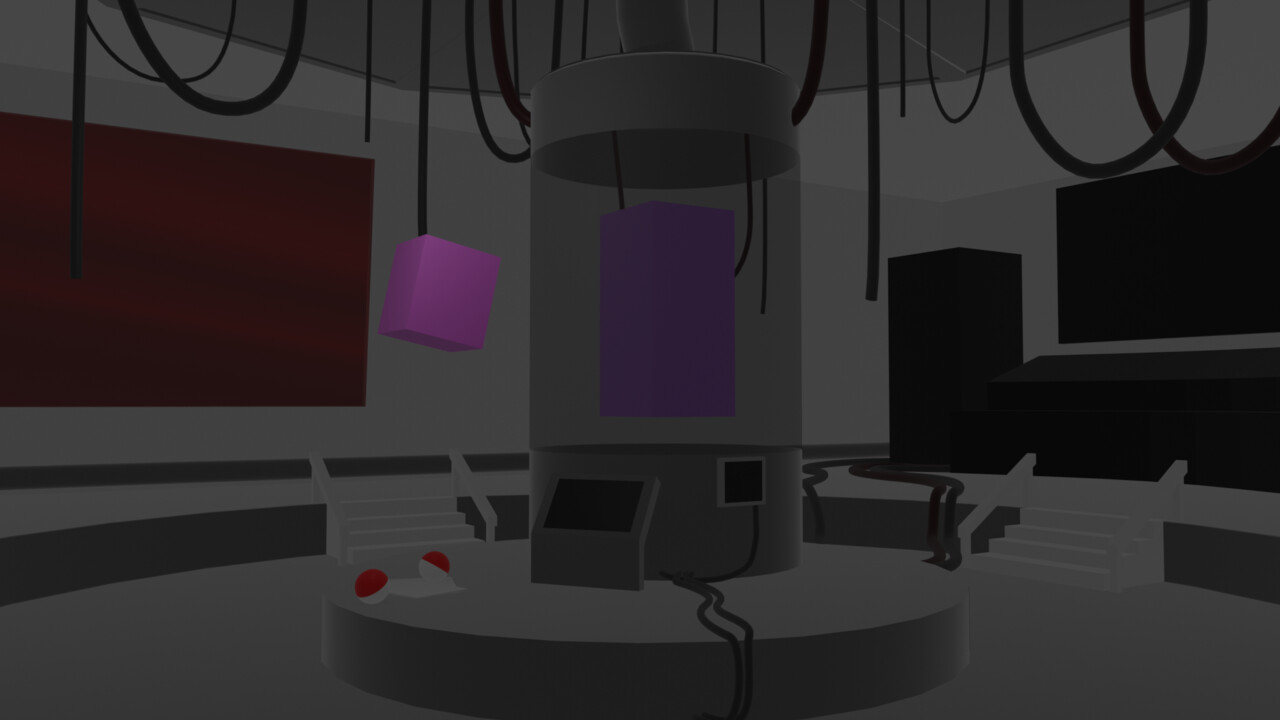 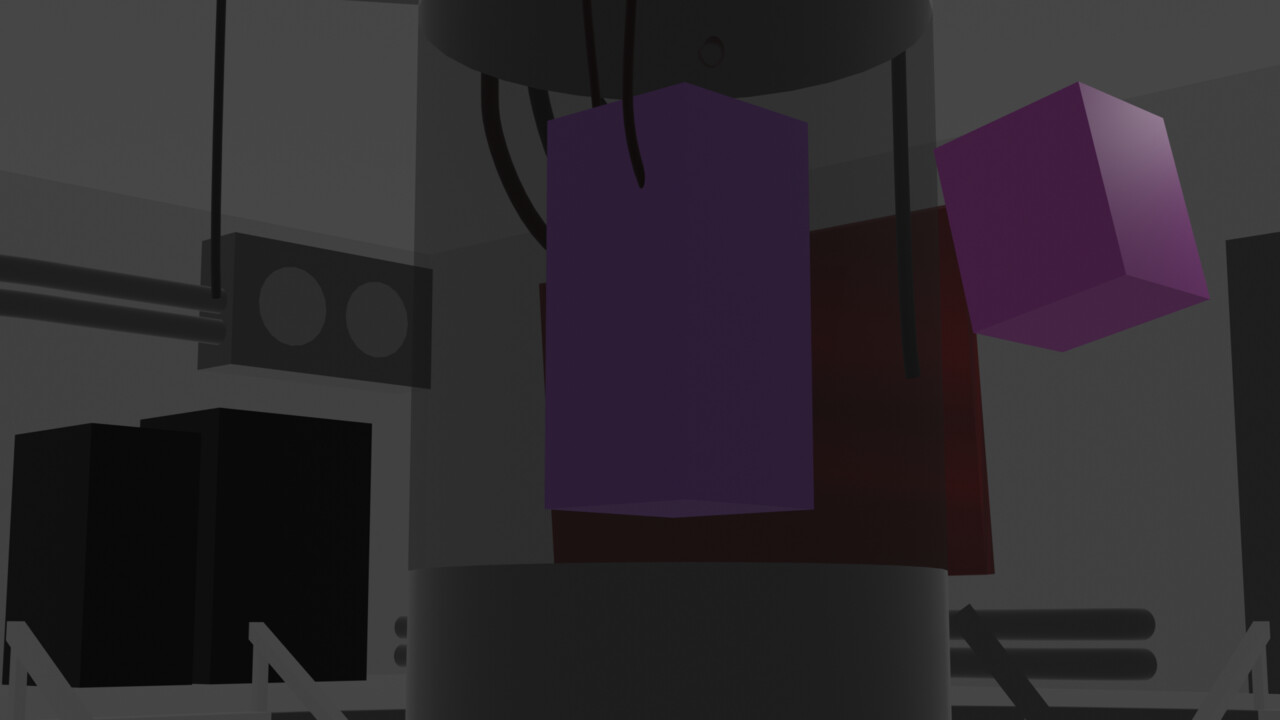 I am still working on getting the angle right for this render, but once I get more of the updated models in the scene I should be able to get the right angle and field of view to get the feeling I'm going for.

Below are screenshots of the room in its base grey look, to get a better picture of the room as a whole. The windows face towards the pod with Mew's back to them, focused only on Mewtwo. 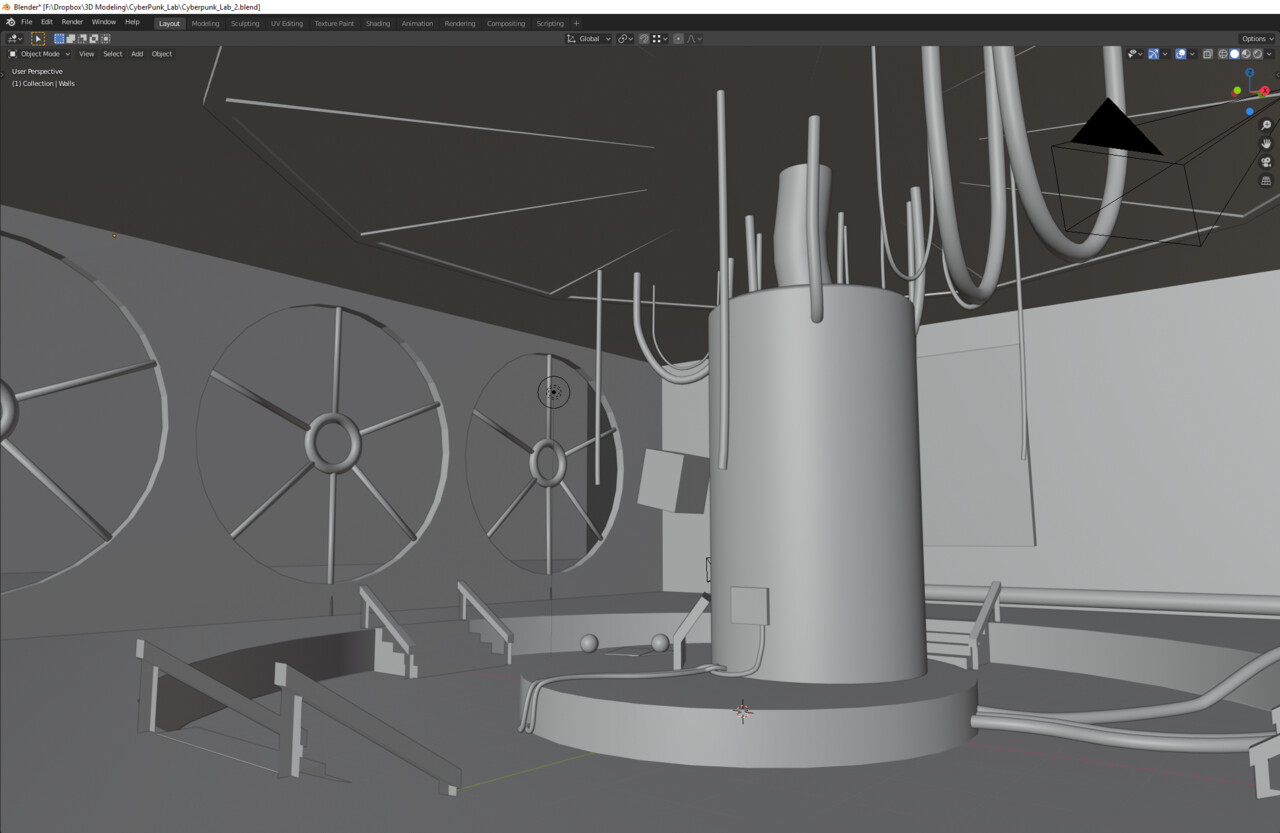 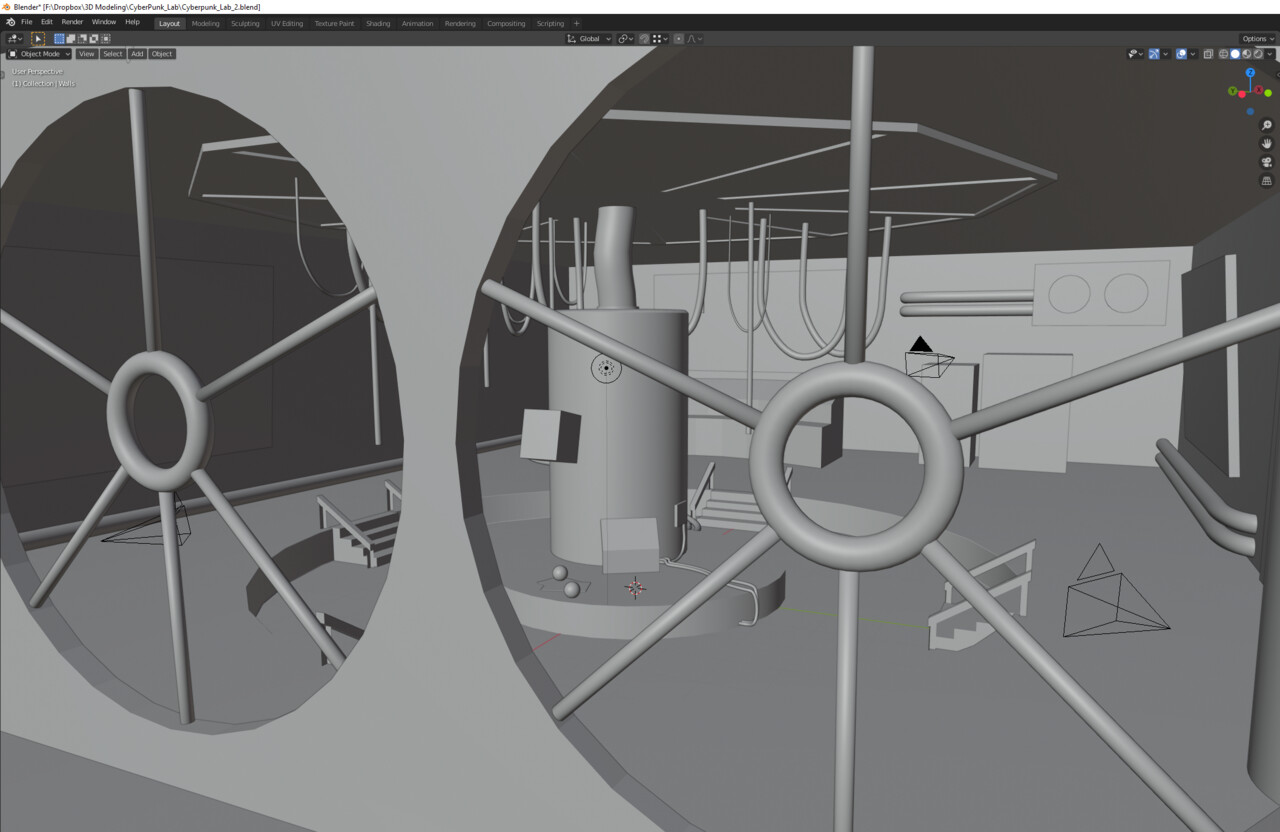 The full layout in these shots above and below, The primary focal point is the pod in the center with the secondary being the computer in the back and some tertiary objects such as the vent and machines beside the computer terminal and accents like the pipes and the screens along the walls. 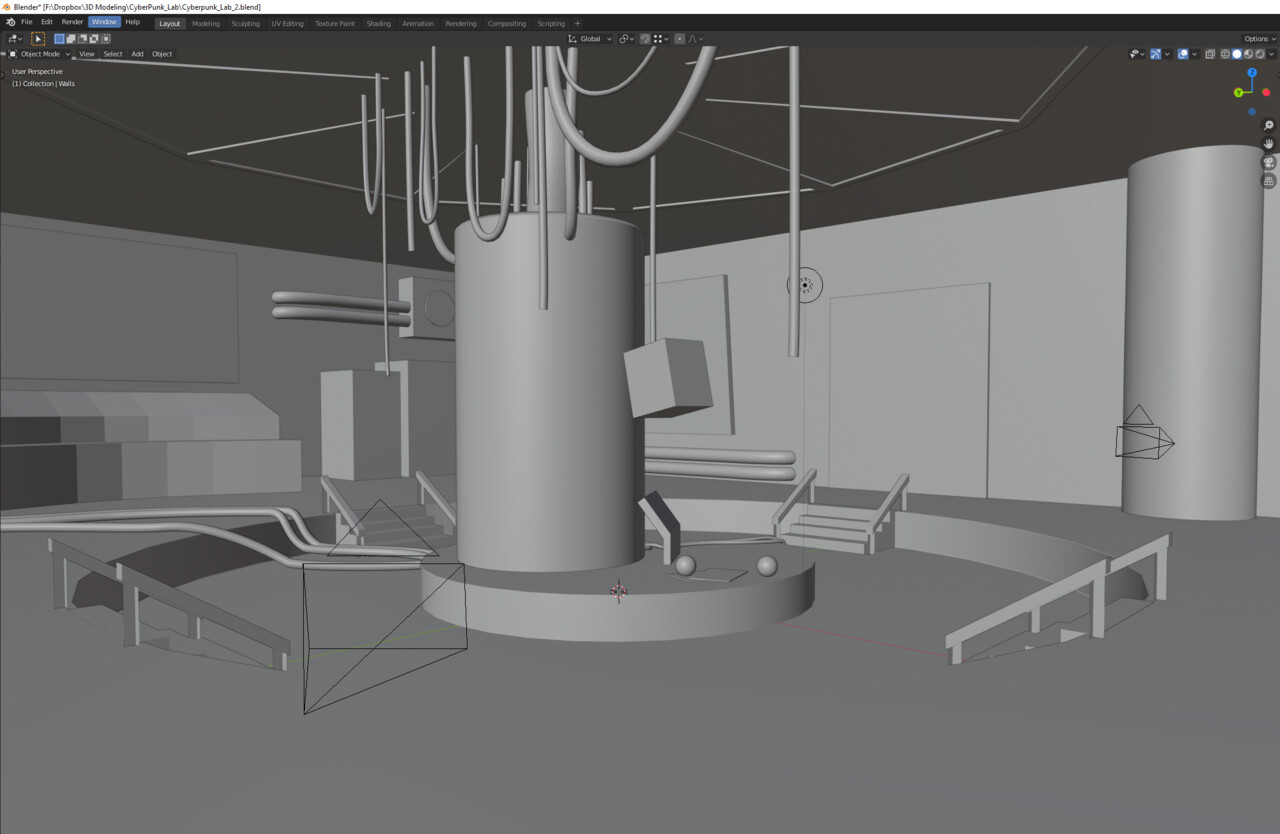 I plan to add more emission lights to the scene which should up the cyberpunk feel, and in the image below I used an HDRI to get the outdoor lighting that I was going for. If I have time, I may do some simple building models outside with emissive signs, though depending on how it looks I may just go with an image background. I'm not entirely sold on the windows, I might make them full of industrial slats instead of the current window design. But I want the lighting to be dark and cool, with purple, red, and blue to highlight the somber tone and pain felt in the final scene. 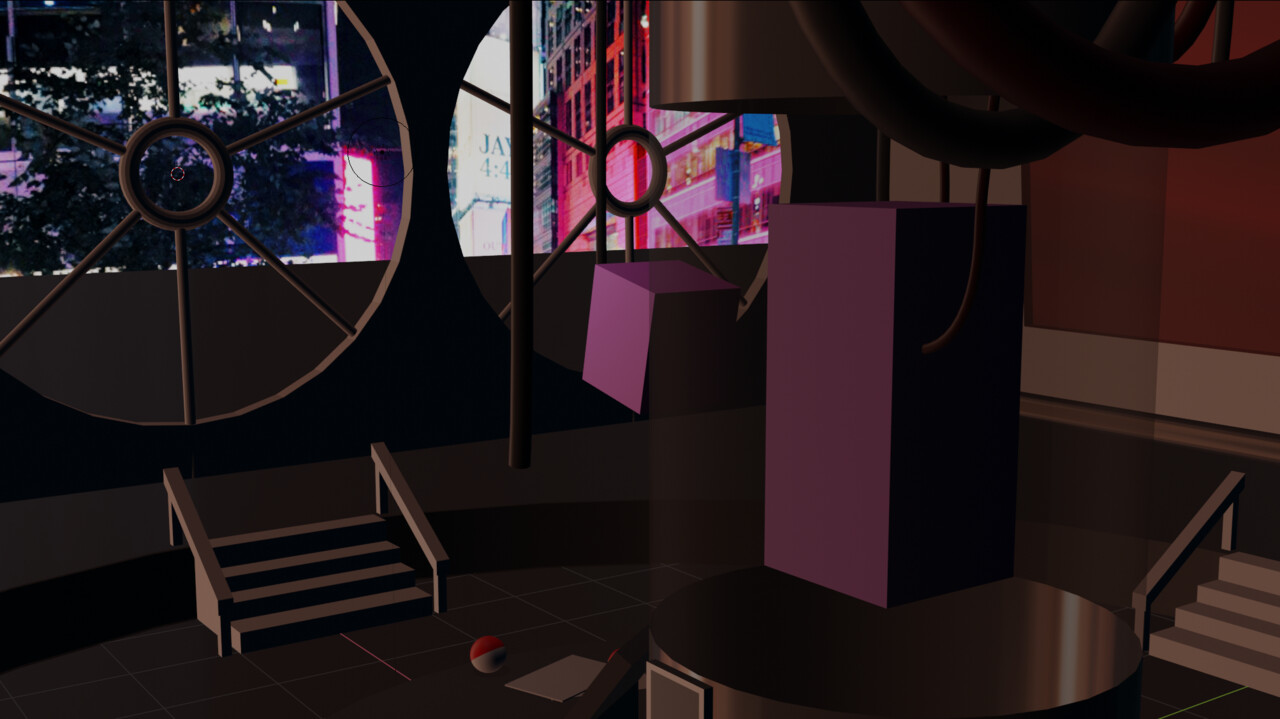 My next step is to get this into Unreal and start testing and playing with lighting. I also need to settle on my primary mood board and finalize the asset list. I'll focus on the primary objects and then I can work down to stretch objects. I'll try to get through that soon so that I can get to the fun part of building the final models!